Help Charleston Figure Skating Pairs Team — Tallulah Tanner & Sam Herbert — go to the U.S. Figure Skating Championship Series in Boston this November 10th! Typically it could cost over $3000 to attend an out-of-state competition of this magnitude.  We are hoping to raise half of that amount  – $1500. – with the support of our community. The kids are fundraising on their own but finding work right now is tough. Supported by the Figure Skating Club of Charleston and guided by renowned coaches Libbie Chabot and Charlene Durham, this team has what it takes to earn a national ranking.  We just need to get them to Massachusetts! Funds are needed by Nov. 3rd.

Covid, closed rinks, canceled competitions, broken bones — the path to the Championship Series has been paved with faith, grit, and perseverance.  Up before dawn most days of the week, Sam (14 -Johns Island) and Tallulah (10 – James Island) are high-achieving local figure skaters who’ve had success as singles skaters often earning a top 3 position in competitions. In January they formed a pairs team and planned to start competing in spring 2020.

In March all ice rinks were shut down and all competitions worldwide were canceled. This team chose to double-down and have faith that they would not only ice skate again but have a chance to compete.  For nearly 4 months they Zoomed six days a week with coaches from all over the country for strength and agility training, plus off-ice jumps and spins. They also trained in their driveways, back patios, and local parking lots with special PIC skates, unique inline skates that mimic figure skates.  When rinks started opening back up they traveled to regional rinks until finally, their home rink — the Carolina Ice Palace in North Charleston — re-opened in June. Due to all the off-ice training, they hardly missed a beat.  They were on track to excel in their division when Tallulah broke her foot in a freak accident. They trained carefully while Tallulah wore an orthopedic boot, and eventually skated in one of the first post-lockdown events, garnering rave reviews from U.S. Figure Skating judges. (Yes, with a broken foot!)

Our “little team that could” is excited to represent the Lowcountry on a national stage and your help can make that happen.  THANK YOU for your support!

Your current membership will remain current through June 30th 2020.

Due to COVID-19 the club will be making two accommodations this membership year to assist everyone in keeping their status current.

1-We will be renewing memberships at the flat rate that we are required to pay to the USFSA. Once the rink re-opens and future plans become more certain we will require the remainder of our regular priced dues to keep membership current.  This portion of our dues is what will keep our club running, and able to offer test session, the spinner, seminars and social events in the future.

2-We will also be waiving the volunteer requirements and/or $100 buyout for the 2019-2020 membership year. Due to COVID-19 we realize that many of our volunteer opportunities were not available.

Thank you to all that have volunteered this past year!  We will reinstate our volunteer policy as soon as volunteer opportunities become available.

TO RENEW YOUR MEMBERSHIP please visit FSC of Charleston Page’s on Entryeeze.

We look forward to hopefully seeing everyone in person in the near future!

The Figure Skating Club of Charleston remains committed to supporting our coaches during the COVID-19 pandemic that is still adversely affecting our country and our local community.  As such, our fundraising campaign remains open and is ongoing.   Please continue to make donations whenever you can.  We will make monthly distributions to our coaches until this crisis ends, our beloved Carolina Ice Palace reopens and we can all be together again.

The Carolina Ice Palace is closed until March 31st.

The health of our members is our top priority. We hope to reschedule our events and any future events that may need to be rescheduled.

Jim Millns, coach and Olympic Bronze Medalist in ice dancing, will host our first seminar. This seminar is for parents of figure skaters, regardless of their skating level or experience, and adult skaters wanting to learn or participate more.

This event is FREE. 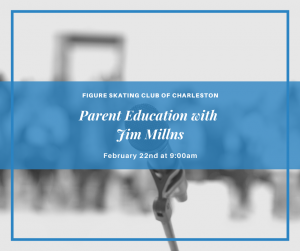 Discover the MAGIC of Skating 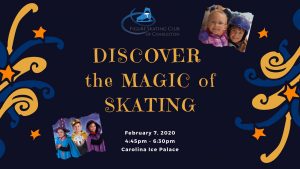 Join us as we celebrate National Skating Month’s MAGICAL theme! Our Magical event is Friday, February 7th from 4:45pm – 6:30pm.

Come dressed as your favorite magical character, wizard or witch. Skating from 4:45-5:45pm and then pizza and drinks from 5:45-6:30pm.

$10/skater and $5/non-skating sibling or parent for pizza. Payments will be collected at the door. 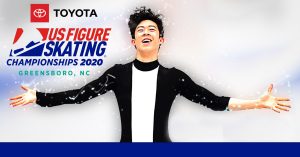 Our very own Harris Spring (Emma’s dad) is qualified to sharpen skate blades. The cost is $20.00, $2 of which will be donated to the FSCC. Cash, check or Venmo accepted.

For higher-level skaters wishing to have their skates sharpened by either Mark Cockerell in Columbia or Joe Delecki in Myrtle Beach, we are currently in the process of organizing a workable system of transporting skates to and from both locations.  More information to follow soon.

We send monthly newsletters about what our members are up to and about upcoming figure skating related events!